A native Trinnov Mac App is now available via the Trinnov website.

The app essentially makes it much easier for anyone to connect to any Trinnov processor over the network, as units with a recent software version that are detected locally will automatically show up in a list, and the VNC connection will be opened with a single click and no password required.

The app also allows you to backup and restore presets locally from your Mac.

This app is a first iteration and extra features will be added in the future. Long term, expect some convergence with the features available on my.trinnov.audio.

The code is written so there will soon be Windows and mobile versions for Android and iOS with basic functions as below: 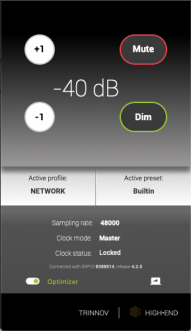 This is the compact control menu you get when connecting to an Amethyst from the App.

With Altitude, the full interface will be displayed instead.

More information is available in the Help section of the app.

As you may be aware, we recently announced that Trinnov was joining the IMAX Enhanced programme, and that they would be first DTS:X Pro licensee. Both were announced with an availability for the second half of 2019.

Just to let you know they are making serious progress, especially with DTS:X Pro for which they will soon start the certification process. The implementation of IMAX Enhanced will come second but should also be easier.

For information, DTS:X Blu-ray and UHD Blu-ray releases, even though below Atmos, are consistent with a ratio slightly below 1 DTS:X title for two Atmos new releases every month, which is probably more than what most people would think.

In commercial theatres, even though rolled out years after Atmos, DTS installed more than 1000 DTS:X screens as of December 2018 , predominantly in Asia.

In comparison, Atmos is already installed over 4000 screens worldwide.

Nevertheless, we are keen to push DTS:X Pro and explain it in more detail during Trinnov events or training sessions.