What goes into a Hi-Fi Show

With a copious amount of planning, supported by great staff and enthusiastic partners… the team from Krix had a blast putting on the most recent Stereonet HiFi Show.

Following the success of the world’s first 24.10.10 demonstration, Krix’s initial planning and discussion led toward demonstrating a more achievable channel count and equipment list. A 9.4.4 layout (with bi-amped MX-40) was chosen early on, which would also demonstrate the capabilities of the Trinnov Altitude +4 update and new 16-channel Amplitude amplifier. 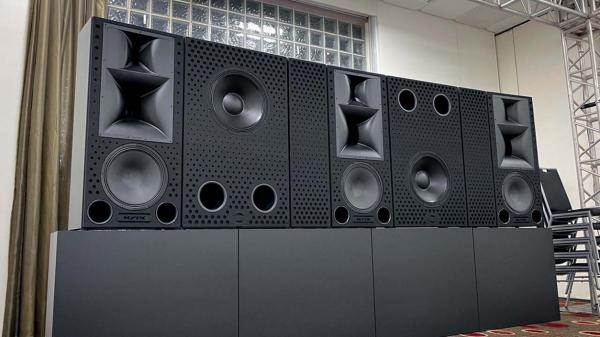 The MX-40 LCR were bi-amped, with active filters managed inside the Trinnov Altitude16.

Planning and logistics are always the hardest and most time-consuming aspects of a HiFi Show. Everything needs to be considered. From freight logistics and hotel policies, to staff flights and accommodation, any error or forgotten item has the potential to make or break the show. Every piece of equipment needs to be accounted for– speakers, subs, audio processor, video processor, amplifiers, source player, projector, screen, DACs, switches, modems, brackets and cables (speaker, interconnect, network and power) are all integral. Speakers need to be reliable and having extra backup equipment on hand is a must – reliability and uptime are important enough at home, let alone at a show!

Shows couldn’t go ahead without Krix’s fantastic partners, who all contributed to making the show a big success. Marc and Ness from Stereonet were, as always, well-organised and had everything running smoothly. The rigging, trusswork, lighting and staging partners also showed themselves to be as helpful and efficient as ever, both in the planning and the execution.

Trusswork, lighting and staging form a large part of the exercise.

Krix’s co-exhibitors Trinnov Audio not only sent pre-production amplifiers and components, but they also sent Mr Tom Garrett, to present. He brought all his natural flair and good-humoured banter. HiFi shows are meant to be fun after all!

Krix also had help from some of their other dealers. Tony from Clarity Calibration made himself available until the late hours of the evening the night before opening.

Barco Residential brought their stunning Njord projector to the party, along with a 180” Screen Innovations Scope Screen and MadVR Envy video processor. The lifting and positioning of the 60kg+ projector up on its perch (seen in the video at the end of this article) was a particularly tense moment. Due to needing to meet safety requirements, it had to be a specific height and distance from the seating area. This meant that the projector would sit 2.5m above ground level on a plinth connected to the main structure and weighted with two 150kg ballasts.

The majority of the Krix team arrived on Wednesday morning before the show’s opening on the Friday, and promptly began fork lifting and unpacking the 15 pallets of goods into the “Real Cinema Zone”. Meanwhile, the rigging company constructed the trusses and lighting next door. The weather wasn’t the best on the day, and much of the forking/loading was done in the rain. By the end of the day, all trusswork, lighting, flooring and speakers were in place. The team had also managed to position the enormous KX-5996 cinema speaker in the hotel lobby, which would turn out to be a major talking point of the show. 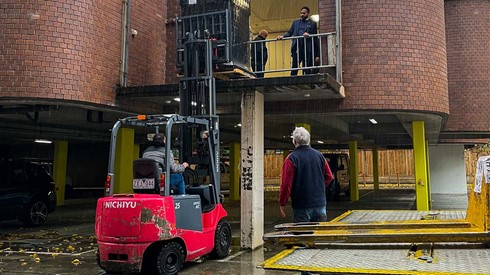 It wasn’t all sunshine and rainbows. 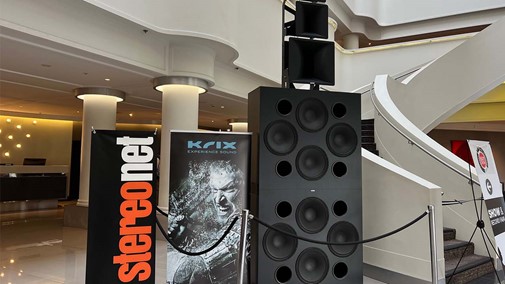 The 3.6m tall KX-5996 commercial cinema speaker stands in the hotel lobby. This speaker suits auditoriums are up to 80m deep.

Friday morning started in full swing with cable runs, rack builds and curtain hanging. By early afternoon the system was ready for some Trinnov Optimizer magic.

Home Cinema Installations That Will Blow You Away

What goes into a Hi-Fi Show